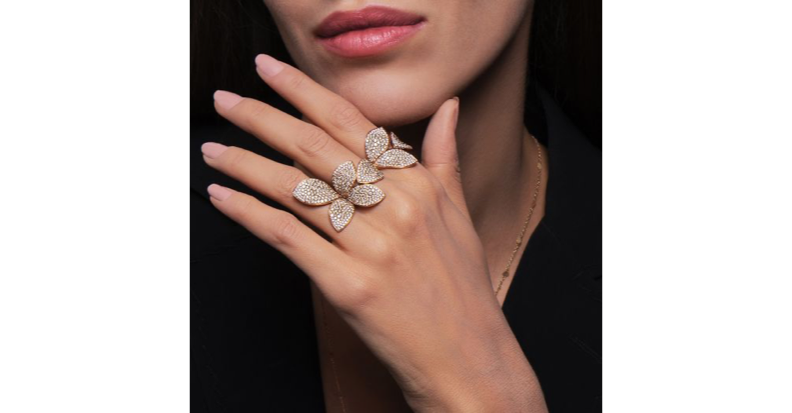 HISTORY
Pasquale Bruni was drawn into the world of jewellery as a very young boy in the workshops of Valenza, the center for the production of jewellery in Italy. He rapidly mastered the techniques and learned the secrets of the goldsmith’s trade, as well as one of the fundamental traits of the firm: a keen eye for detail. The year 1976 marked the beginning of his business adventure: together with a team of five assistants he founded Gioielmoda, a small artisan firm that was the first step in a promising career that led to the birth of a brand of jewellery with a very strong personality. In the year 1997
the company embarked on a new strategy aimed at developing the brand. Gioielmoda became Pasquale Bruni SpA. The name of the founder was used to identify the brand and to plan an international development strategy.
FAMILY
Pasquale Bruni is regarded as one of the greatest designers of fine jewellery in the world. His inimitable taste has changed the interpretation of jewellery both in terms of style as well as production techniques. Today the founder is proud to have at his side his daughter Eugenia Bruni who has been the Creative Director since 2001, and his son Daniele Bruni, the company gemmologist.Three distinct personalities who are united by the same passion: a love of jewellery. A unique team where ideas, suggestions and emotions are continuously shared.
MADE IN ITALY ART
Pasquale Bruni is first and foremost Italian. An Italian who is gifted with an innate talent that was nurtured and matured under the skies of the Bel Paese. And indeed it is this abstract yet unmistakable trait that characterizes the brand and its creations, distinguished by their creativity, imagination, natural elegance and by their capacity to transmit emotion. The aesthetics are rich in vitality and fantasy, rooted in the beauty of the Italian landscape – in particular that of the south, Pasquale Bruni’s homeland. Pasquale Bruni has put the colours and other hints of Calabria into his jewellery by transforming them into a system of symbols that transcends all of his creations. Jewellery that is remarkable in its intricate detail, the hallmark of the jewellery craftsmanship of Valenza, a centre of excellence in the manufacture of fine Italian jewellery.
DESIGN PHILOSOPHY
A piece of jewellery created by Pasquale Bruni is more than a simple precious object, it is a work of art that charms with its minute details. It reflects every woman and tells every woman’s story. It speaks of character and seduction, grace and femininity, dreams and mystery, force and passion. Through symbols, irresistible forms and suggestive colours it communicates beauty, love, stars and dreams, sun and light, flowers and poetry. A magical and enigmatic world. The world of Pasquale Bruni.
ATELIER
Atelier is the story of a jewel that is forged when perfectly formed precious stones of rare beauty and seductive colour, selected from around the world, meet the modern elegance of the Pasquale Bruni brand. Each preciuos stone is a première dame and the jewel that embraces it is a gown that adorns the stone’s beauty and personality. Atelier is the past that becomes the present. In order to create these jewels we have recreated the working environment of the past, by returning to the tools and original workbenches used by goldsmiths 100 years ago. We then brought together the best master godsmiths of today, the heirs of that ancient art and keepers of its secrets. We are passing on these working techniques to the next generation in our company, keeping alive the rich heritage of Italian jewellery.